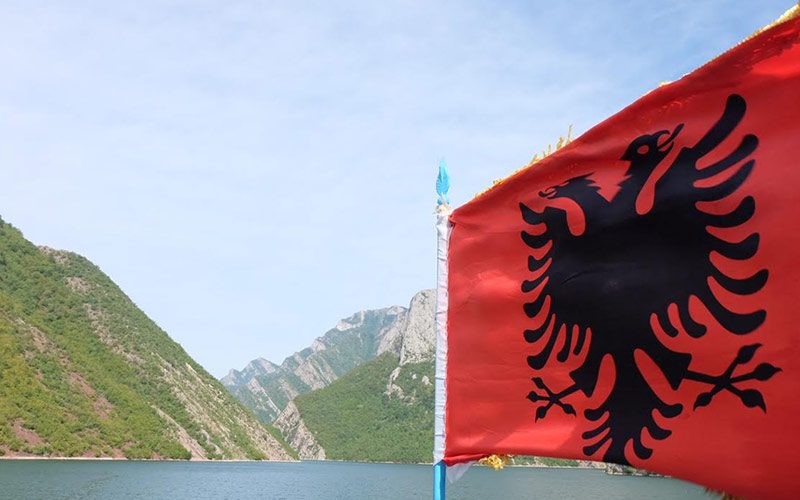 Albanian language even it’s part of the Indo-European language family stands on its own as a very unique language with no similarities. Scholars believe that it derives from ancient Illyrian but there is no proven facts for it mostly because it was only spoken. In fact the earliest written text in Albanian dates in 1555. Around 10 million people speak Albanian (or “Shqip” as we say it) as their native language in the world. It is official language in Albania, Kosovo and North Macedonia.

When the Ottomans invaded Albania in 15th century they called our country “Arnaut” meaning land of mountains. 75% of the country’s territory is mountainous with an average altitude of 700m(twice higher than the Europe). This mountainous terrain is the cause of the amazing biodiversity in the ecosystems. There are 799 protected areas an national parks in Albania, roughly 14% of the entire territory. This make it a top destination for natural tours in Europe.

Living isolated in the mountains and in small communities for centuries has left it tracks in the Albanian culture. Guests treatment and hospitality is very important in our culture. The unwritten law of “code of honour-Besa” it is said that “Our home belongs only to the guest and God” and you can see its resonance in modern days. When an Albanian meets you will shake hands and kiss you in your cheeks four times, we know that it seems strange in some cultures but it’s comes naturally to us. When you meet a local in any village during your hiking trip in Albania or any rural trip do not be surprised when they invite in their house and treat you with raki(traditional liquor) or seasonal fruits from the garden. When you dine as a guest at an Albanian family, the front place of the table is reserved only for the guest, and don’t be surprised when you see the tail(or head, depending on the village) of roasted goat.. While on your trip to Albania, especially countryside, don’t be surprised when old ladies dressed in black stop you, kiss you in both cheeks four times and ask you how are you, where are you from and how is your family and offer candies. There are countless of gestures one foreigner can observe on their trip to Albania all marking the importance of guests and hospitality in Albanian culture.

I bet you that if you have met any Albanian in your life he’s probably told you that Albanian are the oldest people in Europe. This fun fact is based on the rich history of our country. Anywhere you dig, you will find a piece of archaeology. Traces of Illyrians, Greeks and Romans are found in the Archaeological sites of Albania, especially in Butrint which is a masterpiece of historical heritage. Byzantine churches even traces of barbaric rides (Avars, Slavs and Vikings) tell the story of the Middle Ages while the traces of the Ottoman heritage is found on the castles, fortresses, bridges and mosques. Albania is a perfect country for history buffs looking for a history trip in Europe.

When it comes to food we are blessed by our nature. Albanian cuisine is typically Mediterranean based mostly on vegetables, fruits, olive oil, diary products and seafood. Being isolated and mostly poor, Albanian ladies have mastered their skills on using every product grown naturally in the garden to kitchen. We call our mothers and sisters “nikoqire” which is a reputation earned in sacrifices. While males mostly take care of the hard work in the field, livestock and diary products. Living alone in the mountain grazings during summer has made them masters of diary products. Food has always been the highlight of any trip to Albania we have organized and some of the best Albanian dishes you must try are lakror, fli, arapash, tave dheu, fergez, qumeshtor, tave kosi etj.

When you ask Albanian about religion they will answer with a smile on the face that their religion is Albanianism. This is a common tradition inherited by the 19th century when the Albanian Renaissance members called for a unification of the nation despite their personal belief. There are four major beliefs in Albania(Sunni, Christian, Orthodox and Bektashi) but only very few people consider religion important in their lives. This maybe because of the fact that on 1967 the ex-dictator declared Albania an atheist state and killed many clerics who continued to preach in secret. Albanian have always lived in harmony with each other despite the fact of religious differences, even marry each other.An interesting fact about religion in Albania is that the Bektashi order has its headquarters in Tirana making it the center of the world for the Bektashi followers. This Sufi sect preach tolerance, pantheism, meditation and patriotism and even the fact they are Muslim don’t be surprised when you see them drinking raki. One dervish once said me that in Quran it is written that everything that comes from the grapes and dates is allowed to drink.

After the WW2 Albania suffered under the brutal regime of communist dictatorship. The communist party was formed in 1941 and with the help of the Yugoslavs saw itself as a leader of antifascist movement when the war ended. The first thing the dictator did was the elimination of the opponents and found the propaganda machine. The country was a Soviet ally until the 60’s and followed a Stalinist style. This helped the central economy to thrive while the private property was banned and people in the villages lost even their chickens. After the Stalin death, the paranoid dictator allied Albania with the communist China and managed to get some financial aid and bunkered the country while propaganda talked about supremacy of Albania over the United States. As the dictator aged and depressed the country was isolated and no one could enter or leave until in 1991 it collapsed. People starving to death got in revolt and destroyed the totalitarian regime. Now Albania is a member of NATO and candidate for EU. Many of the communist relics now are tourist attractions.

8. Albania as a tourist destination

Time has changed now and communism is just a history and the country is now a well known tourist destination recommend by the well known travel magazines worldwide. Country’s rich history, amazing nature, friendly people, delicious cuisine and crystal clear beaches make any trip to Albania unique and authentic. We at Limitless Albania are pleased to be one of the first travel operators introducing tourists from around the world to the wealth of experiences and activities available in Albania. We love our country; we hope to convey and inspire that passion in you too.

Inspired? We’ll help you to tailor your memorable experience in our Homeland, Albania.
Contact Us

We are a small family owned registered company, dedicated to show you some of the very best places to visit in what we call Homeland, Albania. Read more about LimitlessAlbania.

Albania is a nature-lover's paradise, with a network of 15 national parks encompassing the dramatic Alps of the North to the coastal habitats and wetlands further south. There are round 3,000 different species of plants in the country, while the forests are home to several species of mammals including wolves, polecats, and chamois deer among others. For bird-lovers, there are around 350 bird-species to be seen, including white flamingos, Dalmatian Pelicans, wetland eagles and egrets, while lakes and rivers teem with a rich variety of aquatic life.
We are passionate about preserving, conserving and valuing the natural world around us and, together with environmental NGOs and other national agencies, we strive to promote, inform about and protect the rich bio-diversity and natural habitats of our country.

At Limitless Albania, we believe that tourism should be a collaborative project that benefits local communities and enterprises.
We hand-pick and train local guides who have specialist knowledge of their particular region and will happily go the extra mile to share with you some of their particular favourite places, and/or activities in which to participate.
We work hard to involve and build relationships with local hotels and guest houses, restaurants, local artisans, agro-tourism farms etc so that local economies can benefit and grow from tourism-related income. We believe that through such team-work and collaboration - and by pooling our collective knowledge, experience and skills - all parties involved are motivated to provide the best experience possible for our visitors.

Albania has a uniquely diverse and multi-faceted cultural heritage which we are keen to promote and preserve.
Where possible, and if of interest to you, we make an effort to schedule into the itinerary visits to ancient ruins, castle-fortresses, historic walled cities and cultural events in order to provide visitors with some insight into the complex and multi-layered history that has shaped modern-day Albania, and the rich variety of traditions that continue to play a strong part in our culture to this day.

Ours is a family business that specialises in providing tailor-made holidays based around your interests in order to give you the best possible experience of exploring Albania, whether travelling as a family, as a group or as an individual seeking a personalised tour. We want your stay to be memorable from start to finish, where no detail is over-looked and every day is filled with unique experiences that send you home relaxed, invigorated and keen to return!
Top