A journey to upper Devoll Valley 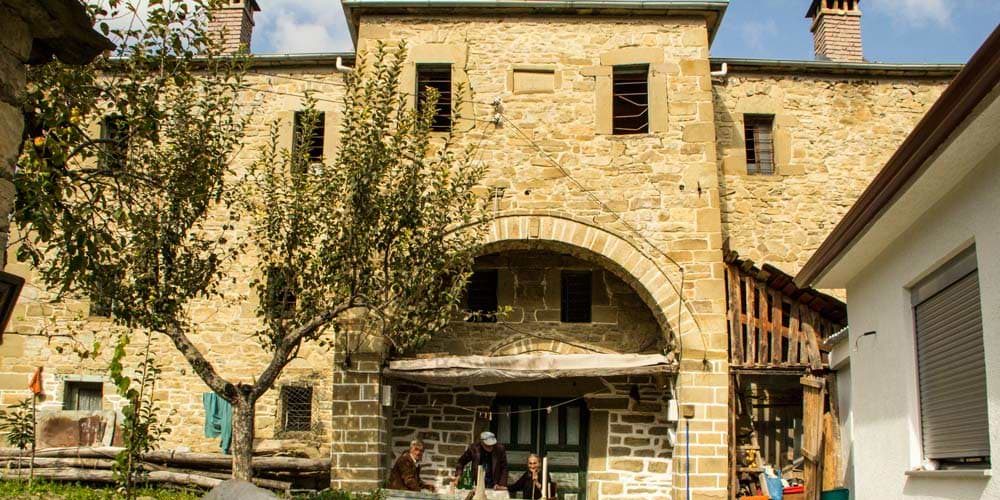 Being isolated for more that 45 years Albania has been out of tourists eye at it surprise them every day. Even we live in the Internet Era and Albania is becoming a ‘hot’ destination there are a lot of places you cant find without a local knowledgeable guide. One of this regions we will show you is Devoll, the most southeastern part of Albania

The Devoll region lies in the southeast corner of Albania. Named for the Devoll river which flows westward before joining with the Osumi in central Albania, Devoll shares a border with the Greek prefectures of Florina and Kastoria at the border of Kapshtica.

The administrative center of Devoll is the city of Bilisht located in the lower plains of Devoll County at the base of Dry Mountain. The elevation of Bilisht is 930 meters above sea level and covers an area of 400 hectares. The population is approximately 10.000 inhabitants. The city is built downwards on the sloping foothills to the flat surface of the national highway. Bilisht has a healthy Mediterranean climate. The winters are cold, wet and often snowy, whereas, the summers are warm and at times very hot.

Taking the road from Bilisht center and following the river stream will take you in a large plain between the high mountains of Morava and Gramos. Miras is the largest settlement among the others, approximately 300 houses. The local community is related to Agriculture. The locals are known as hard workers and this is not a lie because you will always find them working in the field or taking care of their herds.

As you continue upward the riverbed in the left bank your eyes will catch the limestone rooftops of a very small village of not more than 30 houses, where nowdays only 2 of them are inhabited.. This very small settlement is known for being the birthplace of Adam Belushi, the father of John and James Belushi(very famous American actors). Qyteza (Albanian: little town) was formed during the 18th century from the Orthodox settlers of nearby abandoned villages, wrecked from the Ottoman oppression.

The road to Ceta and Arrez, the next village is bumpy and unpaved in the middle of the forest. According to the traditions and materials written from the archives of the time, we learn that Arrëz is a 600-year-old settlement. The village of Arrëz was founded by families that, together with their cattle, were located inside the mountains to avoid the wars of the time. The name of the village can be explained by the word “little nut”, arable land where the first inhabitants settled and laid the foundations. The first inhabitants were of Orthodox faith until the beginning of the 1700s, when they were forcibly forced to convert into Muslims by the Ottoman invaders.

Leaving Arrez, the road will become harder but all the way beautiful. You will find yourself in the middle of the forest of Dobergora. At a altitude of 1300 m, the landscape is amazing. High mountains forested by fir, maple and oak. Herds of cows graze peacefully on the open meadows.

The next unforgettable mountain spot is the village of Dardha, at 1,350 m above sea level. There is snow during the winter months, the air is crystal clear, and the water of the village’s many natural fountains is pure and invigorating. Look out for the unique women’s folk  costumes dominated by black and red (the colors of the national flag), stone houses that offer hospitality to travelers, and don’t miss a taste of the traditional plum raki and the lakrori në saç (a traditional pie made with cabbage between two sheets of dough, and baked in a wood fired oven). Do not be surprise by the American flags you will spot at the village, a lot of people from the community have migrated to USA in the 19th century but have never forget the homeland.

Driving downward  Dardhe into a clay road, only passed by 4×4 vehicle will lead to Sinice. A small settlement of not more than 40 houses. On the road you will meet locals like Lani who invite you to his house and guide to see the village. Lani is one of the locals who have never leaved the village to migrate, instead he have restored the other houses. ‘I have learn the architecture by surveying the style of the other remaining houses and Saint Nicole Church, which is a masterpiece of architecture, build on 1850 according to the old Byzantine style’- he says.

In Sinica village you can spot old villas build on the 1920’ by the locals migrated on USA. There is no one in this village who doesn’t have at last one relative in USA.

The oldest house in Sinica is build on 1899, still standing strong. Only one 94 y.o lady still lives there. You can’t ‘escape’ from her without being guest to try her raki. The Albanian traditional drink.

You can count the number of tourist who have visited this region with the fingers of one hand. Although the locals are now optimistic and building guest houses for tourist in the future, convinced that the future will be better. They have everything to offer, food, nature, history, architecture and above all, their warm hospitality.

Inspired? We’ll help you to tailor your memorable experience in our Homeland, Albania.
Contact Us

We are a small family owned registered company, dedicated to show you some of the very best places to visit in what we call Homeland, Albania. Read more about LimitlessAlbania.

Albania is a nature-lover's paradise, with a network of 15 national parks encompassing the dramatic Alps of the North to the coastal habitats and wetlands further south. There are round 3,000 different species of plants in the country, while the forests are home to several species of mammals including wolves, polecats, and chamois deer among others. For bird-lovers, there are around 350 bird-species to be seen, including white flamingos, Dalmatian Pelicans, wetland eagles and egrets, while lakes and rivers teem with a rich variety of aquatic life.
We are passionate about preserving, conserving and valuing the natural world around us and, together with environmental NGOs and other national agencies, we strive to promote, inform about and protect the rich bio-diversity and natural habitats of our country.

At Limitless Albania, we believe that tourism should be a collaborative project that benefits local communities and enterprises.
We hand-pick and train local guides who have specialist knowledge of their particular region and will happily go the extra mile to share with you some of their particular favourite places, and/or activities in which to participate.
We work hard to involve and build relationships with local hotels and guest houses, restaurants, local artisans, agro-tourism farms etc so that local economies can benefit and grow from tourism-related income. We believe that through such team-work and collaboration - and by pooling our collective knowledge, experience and skills - all parties involved are motivated to provide the best experience possible for our visitors.

Albania has a uniquely diverse and multi-faceted cultural heritage which we are keen to promote and preserve.
Where possible, and if of interest to you, we make an effort to schedule into the itinerary visits to ancient ruins, castle-fortresses, historic walled cities and cultural events in order to provide visitors with some insight into the complex and multi-layered history that has shaped modern-day Albania, and the rich variety of traditions that continue to play a strong part in our culture to this day.

Ours is a family business that specialises in providing tailor-made holidays based around your interests in order to give you the best possible experience of exploring Albania, whether travelling as a family, as a group or as an individual seeking a personalised tour. We want your stay to be memorable from start to finish, where no detail is over-looked and every day is filled with unique experiences that send you home relaxed, invigorated and keen to return!
Top